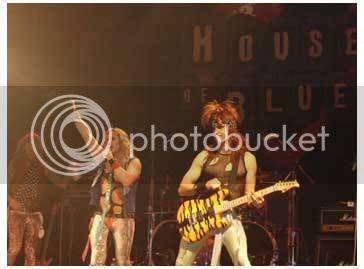 The band Metal Skool played Def Leopard loud enough for the floor to shake under our feet when Mickey and I walked into the House of Blues. We looked around, our ears adjusting, and Mickey screamed, “The guys here are so fucking hot!” She was right, of course. It was a sausage fest dressed in real biker gear with a sprinkling of their chicks in tow.

The party was to honor NASCAR Nations’s lovable biker family whose show proved to be a ratings winner on our mothership network, but now the program is migrating to our popular lifestyle channel. It was a corporate decision to get our namesake back to its core roots of science, nature, forensics, and of course, sharks.

We milled around. “I want to fuck him so bad,” she growled comically when she spotted the father on the show, a big biker daddy known for verbally abusing his sons.

“I wanna get something to eat.” I eyed the huge spread of ribs, Cajun shrimp, crab salad and jalapeño cornbread.

We went to the bar. I ordered her an Absolut cranberry, and a club soda with lime for myself. I turned around to hand her the drink to see her already flirting with a tall beefy man in a BoozeFighters jacket. I’d later find out they claim to be the gang that was the pattern for The Wild One .

She spun around to grab her drink from me, turned back to flash him a smile and another shot at her impressive cleavage. “He said, 'You can call me Buster’,” she laughed in my ear.

“And you should’ve said, 'And you can call me Mickey Hyman'.”

Some executives from headquarters saw me and ushered us into the VIP area cordoned off for the stars of the night. We shook hands, blared our names over a note-for-note cover of “Pour Some Sugar On Me,” and I took Mickey’s picture with Junior.

One of our press people took my arm, told me that we could all get our photos taken outside, and we followed all of them out to a set-up for photo ops.

There were several professional photographers there snap snap snapping while the family posed by their custom bikes, and at one point, the press person nudged us in for our turn. My colleague John snapped blurry one, too.

“Where’s Buster?” Mickey asked as she looked out over the crowd. I shrugged. The party wound down. Mickey kept looking. It was time to go.

“Wait! There he is,” she pointed toward a large group of black leather, one of them being Robert Patrick .

“No. Wait. Buster! Hey! Buster!” She hollered over the crowd waving her arms as if she were trying to get Santa’s attention at the Christmas parade. Buster didn’t turn around. I kept pulling at her sleeve. “Ah, man, I want Buster.” She pretended to pout.

“Yeah, baby, I know. I know. Another time.” She sulked back to the car.

“I am so gonna rub myself tonight thinking about Buster,” she said, dreamily.

“I got it. Why don’t you think about Buster and Junior together?”